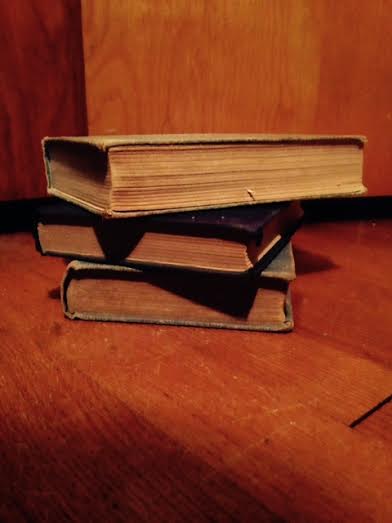 There was a time when I was revered, picked up gently and often by familiar hands that turned my pages with a patient zeal for what lay ahead. My words tattooed minds. My story inspired and influenced. I was quoted and recited at dinner parties, referenced by speakers. I was cherished, but more importantly, I was relevant. I knew my place on the shelf where I rubbed covers with the classics as we waited. To be chosen…

The waiting became sitting. Collecting dust until we were stacked and set in a box like a common toaster oven. Then Mrs. Vaughan grew ill. I was lugged into an attic, where, in a box my pages yellowed with time. Hot summers and brittle winters in the darkness. My contents lay molded and musty until the day heavy footsteps shook the attic floor.

There was light! Large, clumsy hands plunged into my coffin, yanking me from the depths of obscurity. I was fumbled without regard, my bind howling in protest, tight and out of shape from the years of stagnant rest. But any hopes of a renaissance were short-lived. At the bottom of the steps I was tossed to the floor with the others, used to prop open the attic door as the chairs and antiques were hauled down the steps and into the yard.

Hemingway, Fitzgerald, and I performed work better suited for a brick than a novel. Hope was lost. The children were now adults with children of their own who held gadgets that beeped and illuminated their vacant, round faces. We remained on the floor. A weight against a door.

The built-ins were stripped. Shelves emptied of their belongings as the house was rinsed sterile of its history. The dining room table where Mr. and Mrs. Vaughan had enjoyed many home cooked dinners and conversations. Those  familiar landscapes Mrs. Vaughan had brought home from the gallery were removed , leaving light patches on the wall. Next was the chaise lounge, where we had spent so many evenings together.

Bit by bit, everything was picked clean and through as the vultures rummaged through a lifetime of belongings as though it was a bake sale. The furniture, the lamps, and even the rugs off of the floor were rolled up and taken away with little regard to footsteps that once walked over them. All the while we held the door, ignored by the strangers, scuffed and kicked in the bustle.

Shame on the them. It had been the books that Mrs. Vaughan had turned to on those late nights while she waited for  her husband to come home, a bottle of wine and a jazz record playing softly in the background. We were there to comfort her in her time of mourning, her pain spilling out on my pages as she was swept into tears by the whirl of emotion derived from my contents. Like her tears, my pages had dried, but only after absorbing the salt into their being, leaving rippled spots of evidence on pages 162-165.

Yes, I know her well. She had chosen me nearly 75 years ago. A young girl in stockings who’d saved her coins for me. A book. We grew together, in her bedroom, as her soft hands turned my pages while her mind devoured my contents. We’d gone off to college, to the tiny apartment and then to the house.

She knew me well. We were inseparable on vacations and holiday travels. It was I who grew old with her, our skin wrinkling and rippled as she spent a full day attempting to read a single page, growing frustrated with her own mind. It was I who she held when family became scarce, too busy with their own lives to visit. And finally it was I, who’d been  shut into a box upon her death after 88 years of life.

The door was heavy. I’m a slug. My appearance is withered and sagging. But my story is timeless. After the attic was scourged I was noticed. Picked from the stack on the floor. A rush of wind through my pages as I was passed from one set of hands to the next like a meteor rock. I feared the worst.

But then it was right. A young girl with soft, careful hands. A nose to my pages. Familiar  bright eyes that absorbed my opening sentences, just like so many years ago. The slow turn of a page,  then another. I feel the eagerness again. The new life awaiting the story that I was happy to tell again.