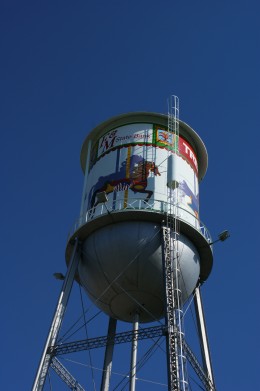 It worked. It really worked. I squeezed my eyes hard just to be sure. Then I heard folks swarming around. 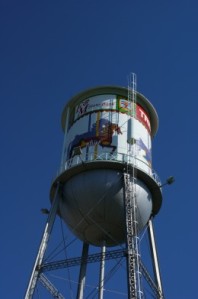 Shielding the relentless evening sun from my eyes, I could have told both squinting Willie and Mr. Herndon that it wasn’t a bird. It was Dana Moyers, crouched in a cross bar section of the tower. But now the crowd was growing by the second, as the county fair had been abandoned to see the flying pig sitting up on the old Daleville water tank.

She squealed and I turned away to keep from laughing. It served her right, the way she walked around in her tiny little cheerleading skirt, laughing and giggling with Paul Mays. Where was Paul anyway? Probably sleeping off the numbness on his brain from having to lend an ear to her blathering.

Walking against the current of onlookers, I adjusted my apron and shuffled clear away from the tide of curious gawkers crowding the newest attraction. At the concession stand, I reached through the window and took two funnel cakes I’d made earlier. A milkshake too, because this was a show. From the picnic table I still had a good view of Princess-Dana-turned-prize-pig.

It was hard, because I wanted to smile like a goat in a briar patch. There wasn’t even a smidge of regret for my classmate and nemesis. Not after she’d made that “Flabby Gabby” remark at the Tastee Freeze on Thursday night.

That had been it. I decided then and there that I was through crying. I’d been fighting with one arm tied behind my back and now it was time to unleash a little bit of force, all in the form of a free milkshake from the concession stand.

Genetics, I guess. Well that and an ancient family book and vials. But Mom would kill me if she’d known what I’d done, and now that the whole town was gathering and gawping and I was getting a getting more than a little freaked out. Because Princess Dana still had nearly an hour until nightfall.

Finishing off funnel cake number one I heard the sirens, followed by the blaring horn of the truck. The crowd scattered to make a path, as Daleville’s lone fire truck barreled onto the scene, adding a hint of diesel to the bouquet of smells swirling over the fairgrounds. Mr. Beckman hopped out like he was part of the festivities, looking happier than a tornado in a trailer park as he tossed a quick wave to the bystanders.

I stood up, tearing a delicious, grease bursting bite of funnel cake number two when I felt her hand on my shoulder.

“Gabby,” she said in that serious tone. The one she used when I turned my dog Max into an elf. “What have we talked about?”

Denying the freakshow job I’d put on Dana was about as useless as a pogo stick in quicksand. My shoulders fell and I looked to my feet, shaking my head at God and genetics and fairness. “I couldn’t help it Mom, she’s so…mean. She’s always calling me names and the whole school thinks she’s perfect.”

“And Paul?” Mom said softly rubbing my back. Paul and I had been best friends when we were little, before that empty headed Dana had batted her eyelashes and cast a spell on him.

The ladder was nearly at the cross section. Mom rubbed my back. I could only nod my head. “How many times to I have to tell you it’s what’s on the inside that counts.”

“But that is her inside,” I said, but when I turned around Mr. Beckman was helping Dana–blonde Dana, all long and golden legged and perfect— down the ladder. The crowd started cheering. The news people snapped pictures. She was Dana again. Already. I must have miscalculated.

“Let’s get you home sweetie,” Mom said, setting the funnel cake down and inching me away from the crowd. That’s when I came face to face with Paul, all huffing and out of breath and perfect.

“Gabby, hey,” he said, looking to the commotion but then back to me. Right into my eyes even. “You look…different.”

“Thanks, I said, as Mom gripped my shoulder. We started through the crowd.

“I’ll see you at school,” he said, and I felt Mom give my shoulder a squeeze. Then she did a double take.

“Did you have a little drink yourself?”