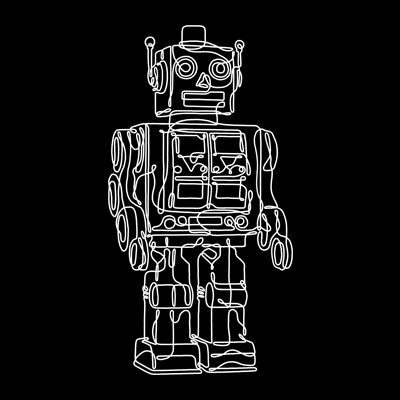 I know it sounds crazy. And I can’t be completely sure. Like, I don’t know if my grandpa has always been a robot or if he was snatched up by an army of them and programmed with computer chips. But trust me, something’s going on with that guy.

He and Grandma came to visit last weekend. While they were unpacking I heard Grandpa talking to my mom about how he had some pins in his elbow and now was considering some kind of titanium implants. Titanium. Seriously. I thought it was weird, but before I could ask Mom was handing off stuff to me, telling me to go put things away. After I did saw Gramps getting something out of the car. I’m pretty sure it was some kind of charging system.

I studied him closely at dinner, noticing how the hairs on his head were springy like wires shooting out in all directions. How confused he looked when I told him about my new Turd Smashers video game or Pokemon cards. It was like he wasn’t programmed to speak English. Later, after everyone drank coffee and yawned and told boring stories and went to bed, I could hear a hum in the guest room. Like a swooshing, groaning, humming, vacuum sucking kind of noise.

I let Mom in on my suspicions the next morning. She laughed, said I was too much. I didn’t see the humor in it, though. I guess it was all up to me to get some answers. So I kept my eyes and ears on Grandpa. Sure, he’s just a regular old guy, wears suspenders, kind of hunched over, grunts when he stands or sits or doesn’t know the answer to a Jeopardy question. But then at night…

Robot noises. You know, like Darth Vader. Not a laughing matter and the more I saw the more I knew. Just knew. I nearly screamed when he ripped a device out of his ears, or when he was in the bathroom and I was walking by—totally not spying because the door was cracked open some and I peeked in–and found him staring at the mirror, completely toothless. You think that’s funny? No, it’s not. It’s terrifying.

On my grandparents last night at our house, I set my ear to the wall, listening for the swooshing and sucking in the next room. I was getting worried about my poor grandma in there with Old Vader, what might happen, so I decided to check on her. Just to be sure you know.

So I tipped out, to the guest room door. Swoosh, click, swoosh went the robot, charging up for another day of mall walking and crossword puzzles—basically all I’d seen Grandpa do since he’d visited. I eased the door door open, gently, not wanting to startle the robot because for all I knew he had death ray eye shooters. You never know, really.

The door opened with a squeak. I waited a few swooshes before I peeked inside. It was dark but the moon cast some light in the room. But the noises rumbled, in and out, as the machine thing worked loudly to charge my grandpa.

I held my breath and peered in.

It was too late. They lay on their backs, both of my grandparents like hosts, apparatus stuck to their faces, sucking and swooshing. I nearly choked on my own tongue.

This was not good, not good at all.

Grandma was a robot too.

2 thoughts on “My grandpa is a robot.”