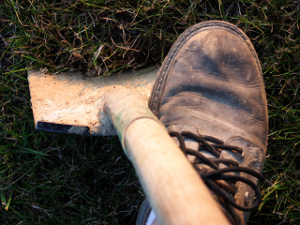 I parked at the curb, where the high weeds and crab grass had nearly swallowed whole the FOR RENT sign in the yard. I grabbed the shovel from my trunk and tried my best to act casual.

The small house looked mostly the same, the roof was now brown and the beige siding had taken on some algae and grime, coming loose near Mom’s old bedroom window. The porch had been redone and now needed another redoing, missing spindles, the white paint gone gray with time.

Another look around, though I wasn’t too concerned about someone calling the cops, even as I crept up the stairs to peek in the dark windows. It was striking, how my life enduring memories existed in such a small space. Hands cupped around my face, I peered inside. The living room was tiny, eight by ten, ten by ten at best. The floors had been polished, but still held the scars of the old kerosene heater. Seeing it made my hand burn, where I’d reached out to catch my fall, running from my sister on Christmas night.

Around the side of the house, just past where the oil tank used to sit, a shiny padlock held the latch to the crawlspace. My old hiding spot, where I would scurry beneath the house knowing my sister would never dare, with the spiders, my head bumping the shelves that held paint brushes in jars of gasoline, turpentine, gas and oil and other smelly liquids spilling onto my legs.

The backyard was a mess. The swing set was gone, of course, and the weeds were small trees now. The maples were scabby and sick, dropping limbs and branches onto the chain link fence. Through the gate, I stopped and took it in, catching my breath, reeling in time. I turned for the back porch, almost hearing the screen door slam, my mother calling me in for dinner.

From the stoops, I measured it out. Fifteen steps took me past the maple, so I recalculated, with smaller steps, like those of an eight-year-old, cutting left then clearing the dead leaves with my shoe.

The sweat dropped from my nose, landing in the overturned dirt. I laughed at how I was trembling, imagining what I’d say to the cops, a landlord, prospective tenants finding some madman digging up the backyard.

“Don’t mind me, I’m just here for the treasure.”

A treasure. More specifically, a Bert Blyleven rookie card eight-year-old me buried in a time capsule. Funny, the things we remember, my memory jogged to a jolt when I came across the Blyleven card on ebay, the current bid just over five thousand dollars.

If memory serves, Nolan Ryan was in there, too. And so I changed course, dug again, arms burning, back screaming. All of my landmarks and markers had changed. Those trees were leaning and tired, vines overtaking the sunlight. The dirt was hard, roots and rocks and then finally red clay. I wiped my brow, another glance at the old house. It was out here I escaped my parents constant fighting, my little sister’s crying. It was in this backyard I took each morning, knowing that sun would come through and I’d have a new day to roam, climb, scrape, run, fall, hop, skip, ride, hike, throw, toss, catch, and sort through the day.

A day was so much back then.

In the dirt, the shovel tapped metal. I was in a foot, foot and a half maybe. A closer look and I saw the red outline, the handle and latches of my Evil Kenevil lunchbox.

My heart, already clanging around in my chest, found a new gear. I fell to my knees, my shirt clinging to my back, clawing and digging out my artifact.

Wiping and brushing, I unearthed the tiny tomb, some rust climbing up Mr. Kinevil’s shoulder, but his smile as glamorous as ever.

The latches took some work, forty-three years buried in the red clay had made them stubborn. I opened the box and peered into the keepsakes. An eight-year old’s worldy possessions.

Some rocks, marbles, Monopoly pieces. I chuckled because I’d even stashed the deed to Boardwalk. But the brown paper bag had my attention.

I unfolded the soft wrinkles, then, wiping my hands on my shirt, hearing the quiver in my breaths, carefully pulled out the cards.

Jackpot. Bert was there, but I didn’t touch it with my filthy hands. I left it in the bag, carefully sorted through the others. Nolan. Hank. Willie. I was smiling when I saw a folded sheet of yellowed paper.

Looks like you’ve got your time capsule here. Nolan Ryan, that guy is really something, huh?Hey kid, I don’t always tell you this, but I love you, you hear? Your Mom and me, we have our problems, but none of that is your fault. You’re a great son. A great brother to your little sis. Sometimes, I just watch you play in the backyard. You’ve got a great heart, Joey. I’m proud of you.
Love,

I covered the holes, a failed man, both in love and fortune. Then I stumbled around the house, to the yard, shovel over shoulder, my dirt covered lunchbox in my grasp. My shirt had come untucked, my pants loose and stained and soaked. My face was slick with tears and sweat as I got to the car and sat. Just sat, thinking how a day was so much. As I stared at the house and its blemishes and how it forever held a part of me within its walls. Then I turned to my treasure, where I’d found something more valuable than cards or memories or money.

Something I’d been looking for my whole life.

One thought on “Treasured”