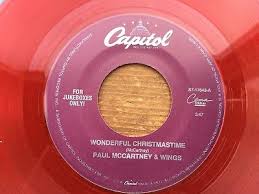 “There are two kinds of people in this world,” Kurt slurred, pausing to take another artless swig. “Those who like Wonderful Christmastime, and those who would rather gargle Pop Rocks with Drano.”

“Liquid Drano? Or Max Gel,” I said, trying to throw my friend off his game. But hammered as he was, Kurt was right. That McCartney song was blaring away.

“It’s not so bad,” he said, showing some teeth. “Kind of tart at first, but it leaves the pearly whites shining.”

“The song or the Drano?”

I saw him eyeing the booths, searching for culprits, anyone daring to sway to the song. I motioned for Julia, hoping she could distract my friend. Ten years of bartending–as semesters came and went, classes dropped here and there until it wasn’t worth the effort–Julia could still play any game for any crowd. She tore away from two twenty-somethings, both guys making no little effort to hide their low hanging stares.

“I thought we got this out of the juke,” I said as she slid in front of us, her face in her hands.

She gave me a shrug, the one that said, “I just work here.”

Kurt reached for her hand. He’d always been the charmer, the one who got the girls. I was always the one who lent a shoulder for them to cry on afterwards. “Skip it. Please. I’m begging you.”

Kurt buried his head in his hands. “Three minutes of hell. The chorus, it just never stops. It just. Keeps. On.”

On cue, the chorus began. “Simply, having, a wonderful…”

The middle booth, crammed tight with Northface vests and plaid scarves, chanted along off key and out of rhythm. It was a regular beer commercial over there.

Kurt fell back to his stool. “You have the power to skip it. Use it.”

He drained his beer and gave her his Drano smile. She flashed a glance to the end of the bar, where her fan club beckoned, then back to me. “Watch him, okay?”

“I make no promises.”

With a sigh she spun off, a ninja in black tights. I made a conscious effort to be a gentleman. Kurt pounded his head on the bar. Downstream, the dummies cranked up with the flirting—some form of it, anyway.

It never bothered Kurt much, the ogling. Maybe he figured it went the job. Besides, Julia could handle those twits and few more. Last week, some goofballs in ballcaps were scoffing just a little too loud about all the recent harassment allegations. When Julia told them to knock it off they started calling her a feminist. So she set the jukebox to Fiona Apple for the rest of the night.

And it was still better than this.

Kurt lifted his giant head. “He was in arguably the greatest band of all times. How could he do this?”
I was on my phone now, messing with him. “Well, it says here McCartney makes over $400,000 annually off this song alone.”

“You’re such an asshole.”

The song synthesized its way to a merciful end. Julia slid two Sam Adams our way for playing nice with the yuppies. Kurt was still going on about Sergeant Peppers while I was reading from my phone about how in 1979, the B side to “Wonderful” was “Rudolph the Red Nosed Reggae.”

Seriously Paul, what the hell?

Sure, to some maybe it was sad, the two of us there, both forty and divorced, roommates sitting at the bar and crushing on a bartender. And I suppose it was, but sometimes, when the frost framed the bay window and the bar took on that certain warmth like the glow of a beer commercial, well, for a while things are just okay.

Then someone played “Wonderful Christmastime.” Again.

And this time Julia didn’t even try to stop Kurt.