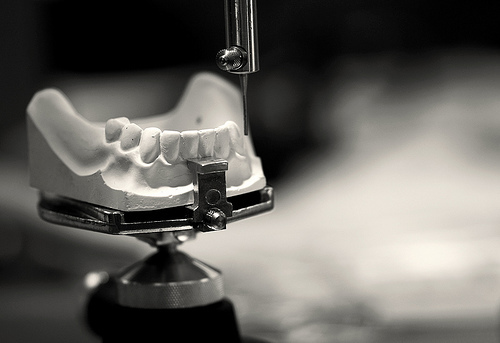 Mrs. Ortiz had gotten to her feet when she heard the commotion in the back, and so she was standing and ready when the door flung open and her son, Anthony, appeared, clutching his mouth. His shirt was ripped at the collar and his hair was smeared with what looked to be toothpaste. A quick shove cleared him from the doorway.

Anthony whirled around to the young dental assistant. She had her own problems, with several wet patches on her shirt and pants. She worked to fix her ponytail, her face flushed. “Maggot breath,” she said, slamming the door before the boy could get to her.

Those waiting exchanged looks, as Anthony’s mother scrambled to get her things. She told the boy to wait, fixing a smile on her face for the audience. The receptionist at the window called her over. “Mrs. Ortiz? If you could…”

Mrs. Ortiz shot a stern look to her son, already with his shoulder against the front door. Then she approached the window, forcing pleasantries in her voice the way one might stuff a foot into a boot.

The receptionist had mangled the paperclip in her hands. Her mouth was creased tight and her voice low with concern. “Well dear, this is an awfully funny thing, it um, well…”

Behind the stammering receptionist, the young assistant sighed, rolled her eyes and crossed her arms tightly over her chest. It was clear she did not see the humor in this awfully funny thing. The receptionists looked down and noticed how she was destroying office supplies. She dropped the paper clip, her poof of Golden44 tinted hair swaying with her head. “Well, I suppose we’ll have to reschedule,” she whispered.

“Not in my lifetime,” the assistant quipped.

Mrs. Ortiz shot the girl a look. “What happened?”

She glanced back to her son, still working to get the toothpaste out of his hair. Mrs. Ortiz felt the collection of dull stares peering over the lobby magazines. She leveled her brow and leaned past the receptionist to the assistant for answers. “What’s going on?”

“Well,” the receptionist began, looking back and forth, her hands going for that paper clip again when the assistant let out a huff and pushed off the wall. She snatched a chart from the counter, muttering under her breath. Then she opened the door and at the last minute forced a smile.

An amoeba of a man uncrossed his legs and then began the process of getting to his feet. He nodded, gripped the arms of the chair, and mounted the charge against gravity. The assistant tapped her foo while glaring at Anthony. Once upright, Mr. Grimshaw took a gander around the room, seemingly without a clue as to why he’d stood in the first place.

Mrs. Ortiz smiled politely at the receptionist. “Was there a problem back there?”

“She tried to cut out my tongue!” Anthony yelled out.

“He bit me!” The assistant said, her high-pitched shriek detonating hearing aids.

“Only after you spayed me with the hose,” Anthony retorted, a hand stuck in his hair.

“I did not, you twerp. I was rinsing your disgusting mouth.”

Mr. Grimshaw was abandoned as the assistant charged after the boy. Mrs. Ortiz swiftly stepped back and put herself between the two. Anthony said the assistant wasn’t fit to clean a dog’s mouth and the assistant told the boy she’d rather clean toilets.

The receptionist gasped, because well she had never. Mrs. Ortiz held out her hands like a referee in a heavyweight bout. She told the children to get a hold on themselves. Mr. Grimshaw backed into his seat, fiddling with his hearing bug, as he called it.

The whirring in the back stopped, and the room was quiet save for the contemporary Christian music floating from the ceiling. The dentist emerged, ripping off his mask and explaining that he was trying to fix a crown and that he could use some assistance.

“Sorry Dad,” the assistant said, pointing at the boy. “But I shouldn’t have to deal with that.” She gestured to the water spots on her shirt. “I mean, look at me.”

“Look at me!” the boy retorted, and the lobby swung their gazes from girl to boy, then finally to the dentist, who looked from daughter to son and then finally to his wife, who in the melee had managed to get floss tangled around her left earring.

The dentist turned to the audience, hoping to reassure them with a with a toothy grin and a shrug.