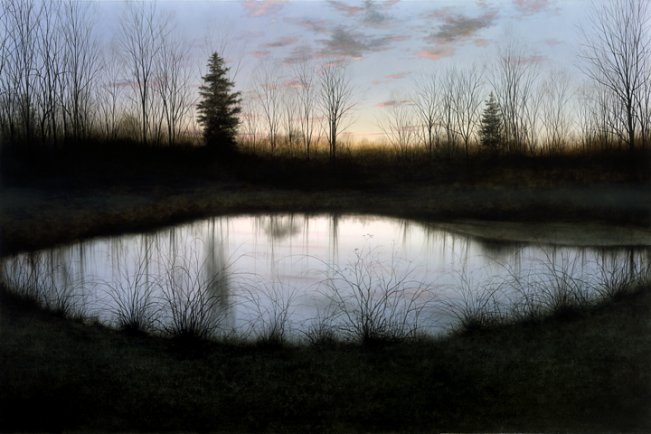 She was six or seven steps up ahead when she spun around and tore into me with her harshest glare. I was certain she was crazy. Absolutely crazy. And yet, I couldn’t tell if the buzzing I heard was coming from the streetlight over our heads or the energy crackling in her eyes.

She flung her hair back and the glare softened into a smile. “I know what I saw. Trust me.”

Like I wasn’t going to follow her. At midnight, under the graying hemlocks, as she set her arms out like wings and spun off towards the end of our street. In a last ditch effort, I ran to her and repeated what she’d said, hoping she’d hear how crazy it sounded.

“So you’re telling me that Mr. Higgins—Preacher Higgins…”

Lia yanked my arm so hard I fell into her. We’d reached the Juniper bush at the end of Preacher Higgins’ driveway. She leaned close, her magic hazels promising unicorns and pixie dust—but most likely trouble. Still, with Lia you never knew, it was hard to doubt her even when she was so  delirious with ideas she couldn’t say them without giggling.

I looked back up the street, going through the motions of putting up a fight.

She turned to me, irritable, as though I’d interrupted the conversation in her head. “Matthew, if you’re going to sit there and complain all night, I’d rather you just go home.”

I followed her—I always did—down the dirt path, hoping bats didn’t swoop for our head as we plodded into the gap between the thickets of brush that led to Greer Pond.

We came around the bend to the tall grass that lashed at Lia’s nicked-up legs. The heat and humidity fought through the darkness, smothered by the clouds that hung close, and amplified the chirring in the trees. I listened for snakes slithering in the shadows, swatted at mosquitoes, and hoped my father didn’t decide to check on me. All the while Lia skipped along barefoot and careless.

My shoe got stuck in the muck. Lia told me to leave the show. She slowed, crouched and motioned like a lunatic for me to hurry. I hobbled over and she wiped back her crazy hair, untamed and matted but streaked with highlights from summer and sun.

Her smile lit the way across the water, rippling with mystery and skippers, to the lone figure with silver hair.

Lia sighed, grabbed my arm and dug in and pulled me in place. She pointed. “Higgins.” It came out like a raspy bark. Lia was the world’s worst whisperer. Always had been.

But it was Preacher Higgins. In a robe at the pond at midnight. I knew his deep rumble anywhere. He was always singing over everyone else at service, his voice so deep I thought the stained glass was going to shake right out from the frame.

If nothing else, seeing Lia’s face was worth risking the apocalypse. Even as Preacher Higgins could spot a squeak from the pulpit. If he decided on a moment of quiet reflection we were sunk. What was he doing anyway?

A crack in the clouds. Sure as midnight, Preacher Higgins’s robe fell like the walls of Jericho. He stood pale as moonlight, letting it hang, so to speak.

I covered my mouth. Lia gave me a shove. “See!”

Higgins threw his hands to the sky, his shriveled parts dangling in the moonlight. I wouldn’t have been surprised if lightning struck us down were we stood. Where I stood anyway, Lia had lost all control, rolling on her back and convulsing with laughter. She let out a gasp and tried to hold it back, then cut loose with a howl that woke chickens clear across to Gretna.

Higgins’ arms fell to his side and he hunched over trying to get a look at his midnight congregation.

Lia was up in a blink, snatching my arm, giggling and snorting as she dragged me back through the grass. I took one last look back at the man who’d baptized me, now fumbling about for his robe. I knew then I’d never rid myself of that image of Preacher Higgins. His ivory white backside at the pond.

And he wouldn’t forget either, when he so kindly brought my muddy shoe to my house the next day