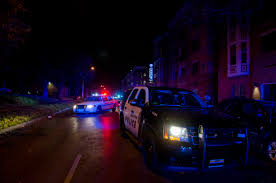 But it took long enough. And it wasn’t until after I’d texted the news station with leads and emailed the papers from his phone. Risky, yeah, but what was I supposed to do? Things were moving slow and I needed to quicken the pace. That Amber Alert did the trick though. Should have thought of that sooner.

They come banging on the door—“Police!”—huffing and charging, somewhat pissy about the whole deal after getting lambasted online. It’s all I can do not to giggle, especially after it takes them not one or two but four tries to get the tissue thin door down. I know cops are skittish these days, but come on guys, put a shoulder into it.

You’ll have to excuse me, by the way, my respect for law enforcement sort of plummeted after they insinuated that my sister asked for it.

Now here they come, all balls and glory. I assume the position on the blood stained mattress I’d yanked from one of the bedrooms. I whip up some quick tears and even pee myself for good measure. I swear, lolling my head around, my eyes back in my skull, I feel myself really getting into character. I actually feel the trauma. Law & Order shit, you know?  All thanks to Chris, my drama teacher.

Who knew I was so talented? But I have to be for this thing to work. Hallie helped, and everything else just sort of fell in place. Me hanging back after school with Chris, behind the stage in the dark. Then a sweet little kiss, just like with Hallie.

Now look at him, over there clammy and mumbling, the fucker. The cops manhandle him, blowing off steam, letting out their frustration with a knee in his back, a kick to the ribs. Not going to duck your way out of this one, pretty boy.

Nope. Not this time. Not after Hallie gets called a whore and you walk? I watch as they drag him through the room. “No. No. It’s her, it’s her. She’s brought me here. Tell them Stacey, please!”

Tell them what? That I drugged you? Shot your veins up with enough smack to keep you tweaking for days. No, let’s not. Oh, and watch it there, you’re drooling.

A detective kneels down, his hand hovering over my back, afraid to touch me.

Do I feel a slight tinge of remorse? Ask me later. Ask my sister how she’s doing, sitting in a treatment center in Maryland. All because of this douche. Fuck him. He had it coming.

It feels kind of nice, the way they fawn over me. Blanket over the shoulders and all of that. Outside, some bystanders are watching. Poor Chris doesn’t get the VIP treatment but a palm to his head as they chunk him in the back of that squad car. Abduction. Indecent liberties. Heroin. That guy has a long road ahead of him.

I bite my smile as they ease me in a Suburban. For nearly a year we’d planned this, one visit at a time. And the fact that Chris came on to me only sealed the deal. And it proves he would have kept it up until he got caught.

So there. He got caught.