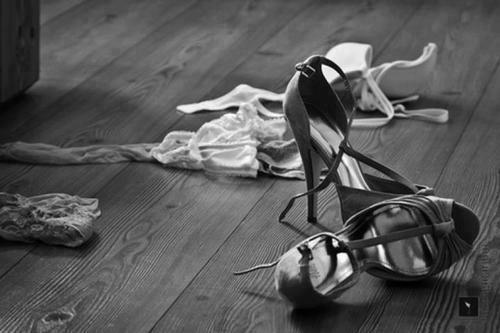 “I would have never married you had I known it was so small.”

“What?” Gary exclaimed, sitting up on his side of the bed.

“Oh please, don’t be so dramatic. You know what I mean.”

“Of course you don’t. I mean your attention span.”

Gary studied his wife. They didn’t break new ground very often, not after nineteen years of marriage. So as Janice flung the covers back, he was still stunned yet relieved, and wondering why he wasn’t more in lust with such an attractive woman.

Janice stood, wiped her hair back, the few gray strands bringing some formality to her sandy blonde bed nest. “I don’t get it Gary, sometimes it’s like sleeping with Rain Man. Where were you just now?”

Gary rubbed his side, still stung by the marriage comment. “Never would have married me?”

She let her eyes roam her head. “Well, who would you have married? Who was in our room just now? Teresa, from school?” Janice perked up, eyes fluttering. “’Oh hi, Gary, I love your tie, tee hee.’”

Gary couldn’t remember ever seeing such a thing: Janice was jealous. And if her breasts weren’t so distracting he would have gotten a kick out of it. Instead he swallowed down his smile, because what wasn’t so funny was how it fit like a grotesque mask over her usually poised face. It was his role to play, the jealous one, especially when they went out for drinks or dancing. Come to think of it, he hadn’t been jealous in a while.

His thoughts fled to Teresa, the shapley young teacher at the high school where Janice taught. “Teresa? Really?”

Jesus, what had brought this on? “No, I’ve got a lot on my mind right now.”

She groaned, irritable, ashamed. “Janice.” Gary slid up behind her his hands finding her back, a place he knew as well as his thoughts. At least his old thoughts, when they used to stay still, the ones that obeyed him. The ones he understood. Before the meandering kind that wandered and wondered and made his wife feel inferior to their capabilities.

Gary felt like a sack. How could he let her think this was her fault? How could he cause another human being–a strikingly beautiful one at that–feel this way about herself? It was cruel, and she was undeserving of having such a bumbling fool for a companion. Right then, just as Paul and Marge’s SUV arrived in the driveway, Gary felt compelled to prove himself worthy of her smile, to put this behind them, quickly.

As though feeling his urgency, Janice let him off the hook. She put a hand over her shoulder, her scuffed wedding ring still finding a glint in the dark room. “They’re here, go get dressed.”

Gary stood, glanced at the smiling bride and groom inside the dusty picture frame on the wall. Then he turned to his wife, her hair so perfectly desheveled, her back arched as she looked him in the eye, unblinking, naked and desperate to understand what was happening to them, in here, over time, out there. Finally, Gary smiled, teasing the woman he’d humored into marrying him.

“Are you ashamed to be caught in the sack with me?”

Janice gave him a smirk. “I thought I was in the sack with Dustin Hoffman.”

“Play your cards right and you’ll get Tom Cruise later.”

“Great. But the question is, who will I be?”