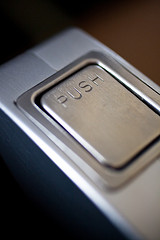 “How bad could it be, Glenda?” Rupert sighed, turning away from the PriceBusters website. It was always something with that woman.

“I don’t know, Tom,” she said, in that way of hers that meant that she did know and was on the verge of telling him, in painstaking detail, just how well she knew.

“For once in your life, just trust me.”

With that Rupert scrolled through the jumble of paragraphs, the font of which was more suited for a flea’s eyes. ACCEPT. There. He puffed his cheeks, let out a gust, then went for the basement, getting to the first step before Glenda huffed her displeasure.

He reclaimed his footing. Shut the door. Glenda shifted and tugged at her jacket, even though it was safari hot in the house. The heat stayed on until May, when she’d wake up one night and jerk the lever over to the air. To Glenda, the natural habitat of the planet was acceptable maybe two days a year, tops. She clicked her tongue and Rupert prepared for the worst.

“Why do you have to be so cheap, Rupert? Like that river cruise last year. Do you remember? How we got stuck in Scottsboro without so much as running water for three days? Remember what it did to my hair?”

“How could I forget?” Rupert said, stomping back into the room, trying unsuccessfully not to think about how her stringy thin hair had taken on the texture of wet cotton candy—or that somewhere in Michigan, there were two kids who after seeing her in her bathrobe probably still woke up screaming in darkest hours of the night.

Rupert gave it a shot, but it was no use. After a light volley, he retreated to the basement. The nice, cool, peaceful basement.

On the big day they arrived at the airport a half an hour before our flight. Of course Rupert had meant to get there sooner but Glenda had taken it upon herself to pack our entire bathroom. TSA had a bonanza.

“It’s supposed to rain most of the week,” Glenda said, lagging behind as they raced to the gates. Rupert put some hustle in his step, thinking, like I’d purposely scheduled our anniversary trip during inclement weather. Although, he couldn’t help thinking of all the money he’d save if they could just skip the pricey tours altogether. Rupert grunted along. Thirty-five years with this woman, but according to his blood pressure, he might be looking at a pardon.

To be completely honest, Rupert noticed a few inconsistencies about the airline. For one, the attendants wore t-shirts as opposed to button downs. More than a few had neck tattoos. The interior of the plane was wood paneling and the tint on the windows was peeling and bubbled. Rupert waved off any doubts, it was the deal of a lifetime.

Glenda found the bench seating to be subpar, then haggled over the window or the aisle. She hated window seats, or any seats for that matter but was concerned about her knees getting bumped sitting by the aisle.

“I just don’t want any bruises.”

Rupert bit his tongue. The woman has two miles of greenish roadways showing on her legs but was worried about getting dinged up. “Fine,” he said, taking the aisle, knowing to choose his battles. He sat down, looking for my free meal coupon when he noticed the ashtrays in the arm rest. “You don’t see that anymore,” he joked. Glenda sighed.

Once airborne, the attendant came by with a car full of Big K sodas. Rupert took two. Only a few hours and they’d be across the pond and —WHAT IN THE HELL IS THAT?

Bodies and luggage hurled forward as the plan lurched to a tilt. Up became down. The engines struggled against gravity and the pull of the Earth as we plunged, climbed, fell. Dingy oxygen masks jiggled above our heads. Rupert leaned over Glenda, who let out a shriek that curled the hair in my ears. All he could see was a gaping hole.

Not a hole. It was supernatural whatever it was, a black void in the ocean. It pulled at the fuselage, and he lost his billfold and coupons in the turbulence. The plane jutted, then flopped again as the screaming and praying and crying surrounded them as they were summoned to impending doom.

People screamed out of fear. But the only thing Rupert feared was another thirty-five years. None of these people had lived with that battle axe of a wife. And even with death closing in, Rupert could still hear her trill, ungrateful blathering, “Well you’ve done it now, Rupert. I really hope you’re happy saving a few pennies on the flight.”

Rupert’s life sentence was up.