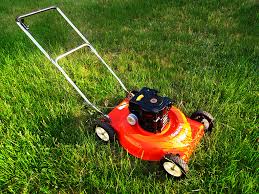 Murray Bill was often seen dragging his trusty mower up and down Dogwood Drive. His flabby arms stayed sunburned and slick with sweat, hanging out of a vulgar Big Johnson sleeveless t-shirt, his gas can tilting, jostling on the trusty Murray push mower he’d kept running like a top for fifteen years.

Mrs. Olive paid Bill forty dollars a week to cut her lawn, and say what you will about old Bill, but he transfigured a patch of weeds and poison ivy into a wonderfully elegant landscape that was the pride of the street. Between his green thumb and immunity to skunkbrush, Murray Bill whipped Mrs. Olive’s garden into something showstopping. And it wasn’t long before the Blueford Garden Society was adding it to their Spring tour.

With the garden society and the bridge club, Mrs. Olive was a busy widow. There was also bible study on Sunday afternoons, though it could be said that since her husband’s passing she’d taken a more cautious approach to handling the Lord’s affairs. When a new minister came calling that spring, hat in hand, Mrs. Olive would invite him inside, even if she found him a bit pretentious. She didn’t much care for the way he never seemed pleased with what she offered. He took his tea with two sugars, and he liked to stare out of her windows, at Bill.

Murray Bill watched without watching. He spoke to the redbuds and crepe myrtles. He examined the warped bark of the maple tree out back, rippled in places, touched with scars of amputated limbs. The bark could tell stories if you let it, Bill thought. Just that most people couldn’t be quiet long enough to bother.

Bill imagined the young preacher was after more than a  little something to line the coffers. He didn’t like to get involved with Mrs. Olive’s affairs. Then again, he didn’t need a magnifying glass to see what was going on.

A few weeks later, Bill was mulching around that very maple when the preacher pulled up in his van. The preacher didn’t button his jacket or bother with his hat. He didn’t gather his well-thumbed bible but a laptop computer. He didn’t hurry up the walkway towards the house, either. Instead, he advanced through the yard, marching over the garden towards Bill with an almost cryptic scowl on his face.“Hello William,” the preacher said in way of greeting. He came in close and hovered over Murray Bill, who was busy with his work and preferred not to be bothered, even if it was a man of the cloth.

Bill wiped his brow. He hadn’t been called William in a long time. And it was then he noticed that the preacher wasn’t as young as he let on. His skin was cracked in places. Rough like bark with pock marks in the cheeks. Murray Bill glanced past the preacher to the house. Mrs. Olive was out playing bridge and wouldn’t be home for another hour yet.

“It’s a nice job you’ve done here. I had no idea you were so…imaginative.”

The preacher smirked when he said it, jabbing a toe into the ferns that lined the side of the house. Murray Bill flinched, for the ferns, sure, but also because he knew well that razor-wire smirk. It was usually accompanied by a baton clicking across the bars of his jail cell.

Murray Bill shook his head. His hands became fists but he knew where that would get him. He tried to stand up but the preacher—who had made this monster a preacher?—set a hand on his shoulder and warned Murray Bill what might become of a man who assaulted a preacher.

The preacher laughed. An awful laugh that reverberated in Bill’s ears at night. “Now listen to me, you sack. I know what you’re up to, buttering up the old hag for some clumsy heist. Thing is, you’re too stupid to make it work, but if you want to play along, I suppose maybe we can work something out.”

Murray Bill shook his head. He tried to make sense of what he was saying. Was he going to hurt Mrs. Olive? The preacher tapped the laptop. “Once she signs a few documents, you could take a few weeks–maybe plant a few daisy’s, heh heh, and then,” he stopped and clicked his teeth. “Expedite the process.”

Bill gasped. The preacher winked. “If you get my drift.”

An explosion went off in Bill’s mind. The preacher flipping over his cot, that baton in his back. Surprise inspections. Beatings. That wink in his eye.

Mrs. Olive arrived home humming a show tune. She found Murray Bill in the backyard, mulching like mad at the fence near the back corner where all that lush poison ivy liked to grow. She called him in for lemonade but Murray Bill, covered in sweat and dirt kept spreading until the pile of mulch was gone.

When he came dragging back, after he set the shovel against the maple, he only stared sheepishly at his dirty boots.

“Did the preacher come by?” she asked.

A slow nod. Mrs. Olive looked Bill over, then back to the curb, where the preacher’s church van sat where he’d left it.

Murray Bill looked around. He didn’t mind going back to jail. As long as Mrs. Olive was safe. He lowered his head, ready to confess when Mrs. Olive set the tray of lemonade on the side table. She glanced around the yard, to the shovel, then looked Bill over once again.

“Well, I suppose we should get the van back to the church.”